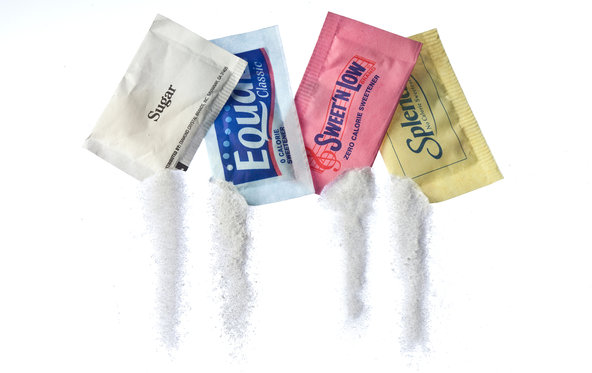 The topic of artificial sweeteners in relation to optimal endocrine function is surrounded by much controversy and there has been conflicting findings in relation to this. Non-nutritive sweeteners (NNS) work by reacting with receptors on the tounge in a similar way to sugar, however the contrasting difference is that artificial sweeteners are by far sweeter tasting than sugar, and they are generally not absorbed or digested by the body in the same way, hence their very low caloric count.

First and fore most it is imperative to understand the function of insulin within the body. When carbohydrates are ingested they are broken down into sugar. This sugar leads to an increase in blood sugar levels. As these levels rise, the body’s response is to release the hormone insulin via the pancreas which in turn enables the blood sugar to leave the blood and enter the cells to be utilised for energy or alternatively to be stored as fat. It has been theorised that insulin is released when the ingestion of artificial sweeteners take place due to their high sugary taste despite the minimum caloric content.

Each individual sweetener is made up of a myriad of chemicals that are highly distinct from one another. Therefore, not to generalise, it is necessary to review this topic by looking at some of the most common types of artificial sweeteners and the effects each one may or may not have on body composition and insulin response.

–         Aspartame is approximately 200 times sweeter than sucrose and according to “Diabetes Research and Clinical Practice” Journal (1986) Aspartame was shown to have a positive effect on insulin secretion.

–         Sucralose is 600 times sweeter than sugar and has been found to move through the digestive system undigested.

“The Brazilian Journal of Medical and Biological Research” (1986) Stevia does not cause an insulin spike.

–         Acesulfame-K studies have shown that this particular sweetener does in fact increase the release of insulin, however some would argue that these findings remain inconclusive due to these studies being performed on rats as opposed to humans.

This being said, it is of paramount importance that one takes a more wholistic view on the impact that Non-nutritive sweeteners have on the body and be aware that indirectly these chemicals can have an adverse effect on the body’s natural homeostatus and metabolic function. Even though some artificial sweeteners may not directly raise blood sugar levels it is crucial to understand that the chemical properties in NNS do not contain any nutrients, proteins, vitamins or fibre and it is necessary to be mindful that they do not provide any assistance in protein synthesis nor do they contribute to replacing glycogen stores post workout. In order to fuel one’s body for optimal performance it is of considerable importance to do so through the wise choice of nutrient dense foods.

To address the correlation between artificial sweeteners and body composition one must look deeper into the side effects that these chemicals can possibly have on the human body. Such effects can include bloating, gastrointestinal discomfort, dhiarrea, headaches, inflammation and pancreatic stress.  All of these side effects can affect optimal health especially over long periods of time.

Artificial sweeteners will not directly attribute to weight gain as they do not contain enough calories, however indirectly if one’s intake of non-nutritive sweeteners is contributing to further sugar cravings, stimulating the desire to eat, and internal inflammation, their overall value to your diet would be questionable.

For someone who is generally dieting to lose weight and regain better health, the occasional use of artificial sweeteners may be of assistance to achieve such goals if used as compensation for high calorie sugary food. However, for top end athletes who monitor not only fat percentage but compete aesthetically, it is my belief that the benefit of complete elimination of artificial sweeteners far outweigh any need to have them provided one is adhering to a proper, well designed nutritional program.

How much protein do I need? How much is counter productive?